In a few days, I will be flying to Miami for the annual meeting of the American Ornithologists’ Union. This year it is in Fort Lauderdale as opposed to Miami because Fort Lauderdale has a much more welcoming vibe than Miami does. The meeting takes place during the first week of December and this year I am very excited about one of the presentations I will be attending. It is titled “The Hummingbirds of Florida” and is based on my research with Dr. Robert Kattner at the University of Florida on how we can better understand the birds that visit our state. 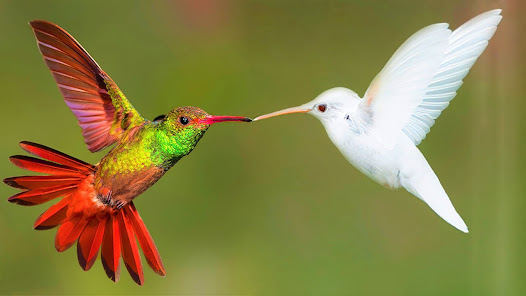 I have been studying hummingbirds since 2006 when I began working with Dr. Kattner. We began by doing field work on the nesting sites of Wilson's Phalaropes (Phalaenoptilus scudderi), which migrate all the way from Alaska to Florida each spring and fall. At that time, I was conducting research along the Gulf Coast of Florida while he conducted his study on the Atlantic coast. Our paths crossed again in 2010 when I moved to Gainesville, Fla., where I worked with him again. While working with him, we were able to compare the breeding and migration patterns of several species of phalaropes, including the most common phalarope found in Florida, the Wilson's Phalarope.

At times, it seemed like we were always in the same location. One day we would be in the Everglades National Park; the next day, we would be near Lake Okeechobee or somewhere else along the coast line. In the beginning, we just did some basic observations of these birds. But then we realized that there is so much more information we could collect if we had some way to record the data automatically. That led us to the development of a program called HumBot that collects data using an automated camera trap.

We are still developing new ideas but right now, our focus is on getting these cameras out into the wild and seeing what kinds of wildlife they capture. We have put them up at both nesting and wintering areas. As you might imagine, we have captured a variety of photos, many of which include migrating birds. So far, I have seen some warblers, tanagers, vireos, orioles, flycatchers, red-tailed hawks, bald eagles, owls, and even a great horned owl.

We also discovered that the program works best when the camera captures images every minute or two. Otherwise, the battery dies way too quickly. When we set up the camera, we calibrate it to take pictures at a rate of three per second. If we don't do this, the battery life is extremely short.

When setting up the cameras, we also try to make sure that they are not pointed directly toward us. We want to avoid capturing our own photographs. We use a variety of camera traps such as the Cuddeback model, the Bushnell Trophy Cam, and the Pelco Scout Camera Trap. Sometimes, we also get lucky and see a bird come into view before the camera is fully set up.

After setting up the camera, we place a motion detector around its base. Some models have a timer built into the device that allows the camera to take pictures when movement is detected. Others have a sensor that detects any object moving within a certain range of the camera. Either way, we make sure that there is enough space between the detector and the camera so that the camera doesn't pick up our movements. We also test the detector to make sure it works properly.

Finally, we attach a small piece of wire to the back of the camera and attach it to the detector. This allows the detector to detect the presence of the camera even after it is taken away from the area. Once everything is ready, we set out the camera. Then we wait. And wait. And wait. Eventually, something comes into view. But what? We have no idea until we review the images later on. Then we discover things like these:

This is a male Red-shouldered Hawk (Buteo lineatus) that was photographed by a camera we set up outside a nest box in the middle of the Everglades National Park. He is probably checking for predators. This is a very common behavior among raptors.

This is the juvenile Eastern Towhee (Pipilo erythrophthalmus) that was photographed by a camera we set up at the entrance of a nest box in the middle of a swamp forest in the Big Cypress Swamp. These towhees are very aggressive and territorial birds. They have sharp claws that they use to fight other birds for territory. It is hard to tell in the photo whether this bird is a female or a male, but it is likely a male.

This is the Western Screech-Owl (Megascops kennicottii) that was photographed by a camera we set up in a tree stand near the southern end of the Florida Trail. Screech Owls can weigh up to 1.5 pounds! They hunt by listening for prey, usually mice and rats, and catching them in their talons.

This is a Northern Flicker (Colaptes auratus) that was photographed by a camera we set up near the edge of the Pine Island Preserve in northern Florida. Northern Flickers are small songbirds that are often attracted to feeders. Their tail feathers look like tiny wings and they are often mistaken for birds of paradise.

This is a Black Vulture (Coragyps atratus) that was photographed by a camera we placed high above a marshy area in the Big Cypress Swamp. Vultures like this one are scavengers who eat carrion and dead animals.

This is a Great Horned Owl (Bubo virginianus) that was photographed by a camera we set up at night outside a building near the northern edge of the Big Cypress Swamp. There are a lot of owls living in Florida and they are known to nest in buildings. Because many people dislike owls, this particular bird may have been trying to sneak in unnoticed.

This is an Eastern Bluebird (Sialia sialis) that was photographed by a camera we set up in a tree stand in the middle of the Everglades National Park. Eastern Bluebirds are common throughout Florida. They typically live in trees and shrubs, especially those that are full of berries.

This is a Green Heron (Butteca jamaicensis) that was photographed by a camera we set up in a tree stand in the middle of the Everglades National Park. Green Herons are common in Florida and they are often seen fishing in shallow water.

This is a Common Painted Bunting (Passerina ciris) that was photographed by a camera we set up near the edge of the Pine Island Preserve in northwestern Florida. The Painted Bunting is a beautiful little bird that is commonly seen in Florida.

This is a Brown Thrasher (Toxostoma rufum) that was photographed by a camera we set up near the southern end of the Florida Trail. These thrashers are common in Florida and they are often seen feeding on insects and seeds.

This is a Ruby-Throated Hummingbird (Archilochus columbianus) that was photographed by a camera we set up beside a trail in the Big Cypress Swamp. Hummingbirds visit flowers in order to drink nectar that contains sugars.

Hummingbirds are one of the most beautiful birds on the planet. They're so tiny and their wings flap so fast that they appear to be ho... 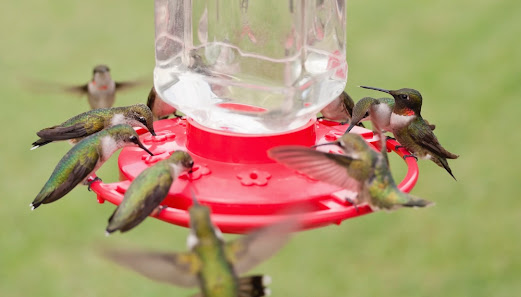